We The People de Bruce Ackerman From distinguished legal scholar Ackerman (Law & Political Science/Yale; Reconstructing American Law, 1984, etc.)--an original and insightful study of the theoretical and historical evolution of the Constitution, and its meaning in modern times. Ackerman creates analytical categories that define both America's distinctive constitutional system and its transformative constitutional experiences. He says that while the American democratic system borrowed much from European theory, Americans have created a novel constitutional system that, unlike the British or German models, distinguishes between two types of politics. In ``normal politics,'' a politically disengaged populace permits interest groups to lobby democratically elected representatives while the representatives make policy, and in ``constitutional politics,'' society mobilizes to debate matters of fundamental principle. Ackerman sees three great transformative movements of constitutional politics--the establishment of the basic framework in the 1780's, the reforms of the Reconstruction Republicans in the 1860's, and those of the New Deal Democrats in the 1930's (who effected their sweeping reinterpretation of the Constitution by means of seminal Supreme Court decisions rather than by Constitutional amendments). Each of these movements, the author says, was characterized by legal creativity bordering on illegality (the framing of the Constitution did not use the amendment process of the then-regnant Articles of Confederation, and the Thirteenth and Fourteenth Amendments did not use the amendment process of Article Five of the Constitution), but, Ackerman argues, each was an authentic response to political crises of its time and was ultimately legitimized by the people. While Ackerman admires the Constitution, he is not blind to its faults or to its historical and imperfect compromises. However, he calls on private American citizens--those whose concern with government competes with other personal concerns--to work for the fulfillment of its egalitarian promises. A thoughtful, informative, and inspiring introduction to our national bedrock. 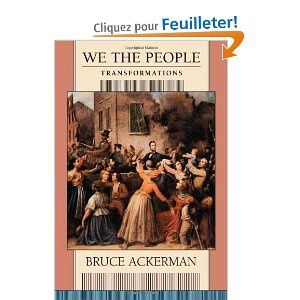 In the second volume in his work We the People (volume I, Foundations, appeared in 1991), a noted Yale legal historian looks at the tangled history of constitutional amendments. Two myths sustain the American people, Ackerman suggests. The first holds that the federal government consistently ignores the will of the people, whose mandate must constantly be pressed against its compromised and uncompromising leaders. The second is that our Constitution is so artfully constructed that changing it, for good or bad, is nearly impossible. Drawing on subtle legal argument and a solid command of history, Ackerman goes on to suggest that although the first scenario may seem to be accurate, the second is certainly not; governments have frequently bent the Constitution to serve their ideological ends. He examines at length the development of the 13th and 14th amendments during Reconstruction, amendments that, under the strictest interpretation of constitutional procedure, should not have been passed, since 10 of the then 37 states refused to ratify it, causing Congress to intervene with martial law in those 10 states, all of them southern. While the Southern governments had forfeited their claim to legitimacy by rebelling, Ackerman writes, the people of the Southern states had not forfeited their right to be counted as constituent parts of the Union. Congressional coercion, then, and not our hallowed system of majoritarian consent, led to constitutional modification. A similar process occurred with much New Deal legislation, save that the New Dealers turned to the people to gain assent to ``a sweeping redefinition of the aims and methods of American government''a redefinition that has given constitutional purists and conservatives fits ever since. To reform the government today, Ackerman believes, supermajority, rather than slim-majority, rule would prevent one party or a chief executive from railroading constitutional changes through Congress. Readers well grounded in constitutional law will find Ackermans arguments fascinating and provocative.